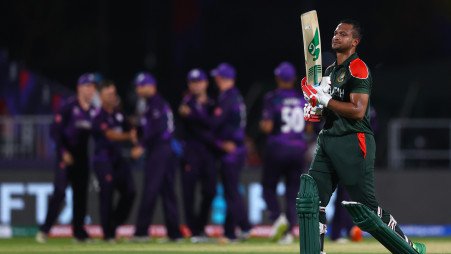 The game swung like a pendulum, either way, multiple times, but it was Scotland who emerged winners in the second match on the opening day of the 2021 ICC Men's T20 World Cup at Al Amerat. Bangladesh, even after winning three back-to-back T20 series before the tournament, had to begin their campaign with a shocking defeat.

Bangladesh fell just short of the target of 140 and lost by six runs. Debutant Chris Greaves had a dream start to his career, having scored an important 45 and dismissed Shakib Al Hasan and Mushfiqur Rahim later.

Bangladesh captain Mahmudullah won the toss and decided to bowl. Mohammad Saifuddin got the first breakthrough for Bangladesh. The medium-pacer got the better of Scotland skipper Kyle Coetzer in the third over.

Scotland started slow but their innings gained momentum as George Munsey struck a four and a six off Mustafizur Rahman to break the shackles. Scotland were 38 for one after six.

Mahedi Hasan was brought into the attack in the eighth over and he made an immediate impact. The ball was quick and straight from Mahedi and Matthew Cross couldn't put the bat on the ball. He made 11 off 17.

Mahedi sent back the dangerous Munsey a couple of balls later and his dismissal left Scotland in a spot of bother at 46 for three.

Bangladesh slowed down things with dot balls and that forced the in-form Richie Barrington to try and hit his way out of trouble. But Shakib had other ideas. He not only got Berrington out but also sent Micheal Leask to the pavilion. With that wicket, Shakib eclipsed Lasith Malinga and became the leading wicket-taker in T20Is.

Mahedi struck again and got the experienced Calum McLeod out. Scotland were then staring down the barrel at 53 for six.

Mark Watt and Chris Greaves brought Scotland back into the contest with an important 51-run stand for the seventh wicket. Taskin broke the partnership in the 18th over by getting Watt out for 22. But the pacer was taken to the cleaners by Greaves as he hit two fours and a maximum in the same over. The 15-run over brought life to Scotland's innings.

Saifuddin too conceded 12 off the penultimate over and Bangladesh required Mustafizur Rahman to finish off strongly. He delivered the goods under pressure and got rid of Greaves and Josh Davey in consecutive deliveries. Scotland posted 140 for nine after 20 overs. They scored 53 off the last five overs thanks to Chris Greaves' quickfire 45 off 28 balls.

Bangladesh spinners had a great time with the ball. Mahedi picked up three while Shakib claimed two.

Soumya Sarkar struck a fantastic six with a flick in the first over but failed to execute the same shot in the next over. Munsey was stationed on the boundary for this very shot and Soumya fell into the trap set by Davey.

Bangladesh were in further trouble at 18 for two when Liton Das hit the ball straight to Munsey at mid-on in the fourth over.

Shakib and Mushfiqur Rahim opted for a cautious approach after the fall of two quick wickets and Bangladesh had a very quiet powerplay (25 for two).

Bangladesh found themselves falling behind the required run-rate at 34 for two after eight overs. Mushfiqur then smashed two sixes off Leask to release the pressure. Bangladesh were 59 for two after 10, requiring 82 off 60 balls to win.

Greaves, who top-scored for Scotland, sent Shakib back to the shed in the 12th over. It was a rank short ball from Greaves but Shakib couldn't make a great connection. McLeod took a brilliant catch at the deep midwicket boundary. The left-hander scored 20 off 28 and Bangladesh were 65 for three when he got out. The partnership between him and Mushfiqur contributed 47 to the total.

Greaves continued to impress as he dismissed the well-set Mushfiqur for 38 in the next over. He attempted a ramp over fine leg but was clean bowled. When he got out, Bangladesh still needed 67 to win off only 41 balls with six wickets in hand.

Things got more difficult as they needed 49 off the last four overs to win. Afif and Mahmudullah took 12 off Davey's over and brought the equation down to 37 off three overs.

Watt removed Afif in the next over, making things tougher for Bangladesh. Watt gave away only five runs in that over.

Greaves was named the player of the match for his magnificent all-round performance.