Committee formed over attack on Hindus in Rangpur, 42 arrested 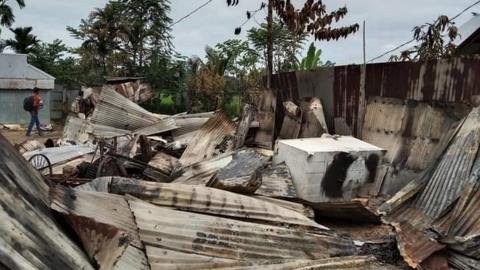 A five-member committee, consisting of Rangpur divisional commissioner, deputy commissioner and police, has been formed to restore peace after the Sunday night's violent attack on the local Hindu community.
So far, 42 people were detained over the incident, Rangpur Superintendent of Police Biplob Kumar Sarkar told The Business Standard.
The teenager, who posted the offensive post, and his family members fled after the attack.
SP Biplob said, "The attackers rampaged the village and burned down 20 houses."
Over 60 families were affected due to the attack. However, No one was reportedly injured.
"At the time of the attack, police fired rubber bullets there to control the situation," the SP added.
Meanwhile, DIG (Rangpur Range) Debdas Bhattacharya has ordered law enforcement agencies to bring everyone involved in the heinous attack to the justice.
"The situation is under control now," Md Khazimuddin, sub-inspector and duty officer of Pirganj police station, said, adding that law enforcers in the area are actively working to arrest the miscreants.
On Sunday night, more than 20 houses of Hindus were burned down by a mob over a Facebook post hurting religious sentiment of Muslims.
The incident took place at North Karimganj of Pirganj upazila in Rangpur after a youth from the community made a social media post desecrating holy Kaaba.
The situation reportedly came under control at 1 am Monday after Additional BGB, RAB and police were deployed in the area.
Rangpur Deputy Commissioner Asib Ahsan said several initiatives have been taken including rehabilitation of the victim families.
Earlier on 13 September, a reported demeaning of the holy Quran stoked communal tensions in Cumilla. The incident sparked a storm on social media as temples and puja celebrations came under attack in several districts.