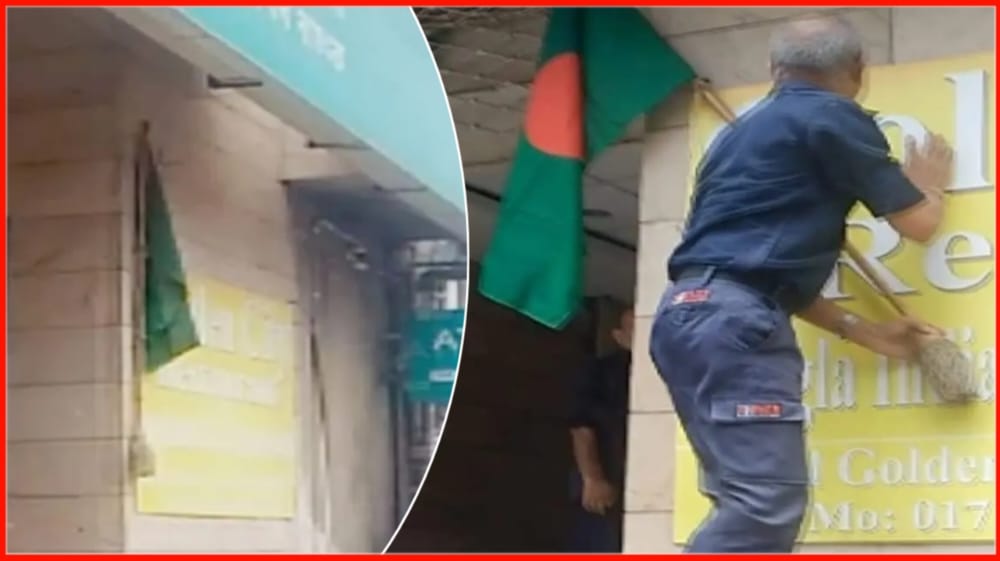 Gvoice Desk: The Bangladeshi national flag was reportedly disrespected at the Sylhet branch of Pakistan-owned Habib Bank Limited.
A broom, instead of a pole, was used to hang the national flag on the occasion of the National Mourning Day today, reports our Sylhet correspondent.
When locals noticed this, they instantly protested and the bank's security personnel immediately took down the flag.
Meanwhile, despite the flag being taken down, there have been widespread protests on social media regarding the issue.
On the National Mourning Day in Bangladesh, citizens have demanded speedy justice over the act of disrespect shown by a Pakistan-owned bank.
The authorities of Habib Bank's Sylhet Branch could not be reached as it was closed. Despite contacting their hotline, the contact number of Mujahidul Islam Bhuiyan, manager of the bank's Sylhet  branch, could not be reached.
In the evening, Habib Bank authorities hoisted the national flag at half-mast on a pole.
Meanwhile, Sylhet District Administration Assistant Commissioner and Executive Magistrate Mezbah Uddin visited the Sylhet branch of Habib Bank after the incident.
Sylhet Deputy Commissioner Md Mojibur Rahman told The Daily Star, "The assistant commissioner went to the spot and did not find the national flag in a dishonourable state. However, we are taking swift action in this regard. I have spoken to the manager of Habib Bank's Sylhet branch, he will give a written explanation in this regard. We will take legal action after receiving his explanation."