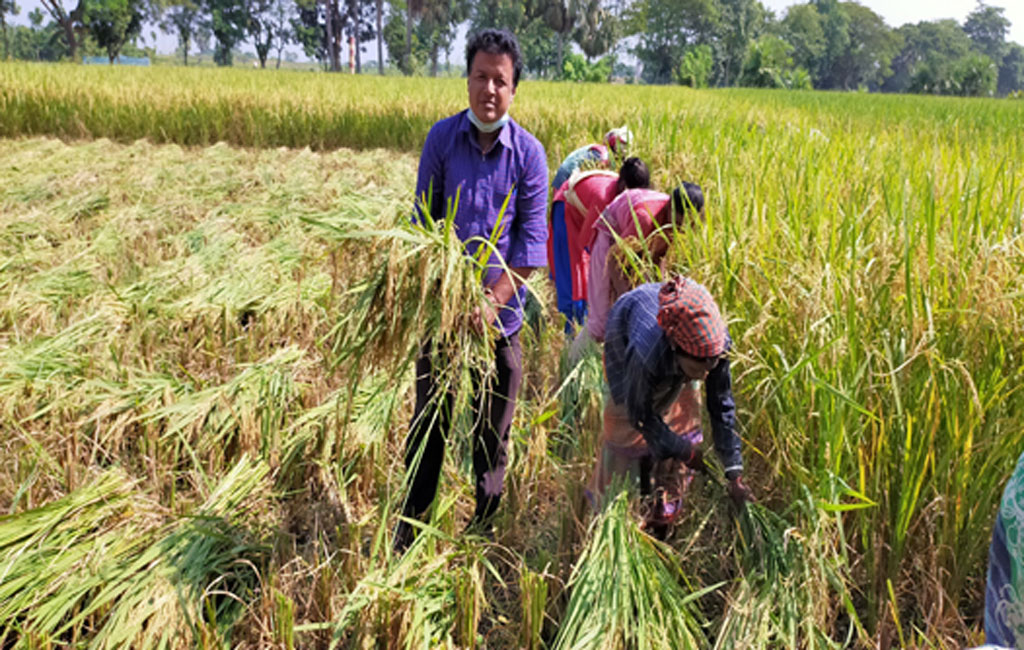 Desk Report : Climate-sensitive aicultural techniques have a direct impact on the livelihoods of locals

The voices of world leaders are always heard everywhere -- from the UN to OP26. Can poor farmers make their way to that stage? Hardly!

But the poorest small-scale farmers of Bangladesh spoke at the COP26 about the projects and practices that are helping them adapt, thanks to IFAD for arranging a virtual visit to Bangladesh, enabling them to speak up.

The UN’s International Fund for Agricultural Development (IFAD) has highlighted the impact of climate change on small-scale farmers at the 26th Conference of the Parties (COP26) to the UN Framework Convention on Climate Change currently underway in Glasgow, UK, through the virtual visit to Bangladesh.

The small-scale farmers, who produce 70-80% of Bangladesh’s food, are most vulnerable to the impacts of climate change – and, ironically, contribute to it the least.

“Bangladesh contributes less than 0.47% of global emissions, yet it is one of the most climate-vulnerable countries in the world,” Prime Minister Sheikh Hasina said in her statement at the Leaders’ Meeting on Action and Solidarity–The Critical Decade at COP26.

It is also a leader in climate action, offering several examples of how poor rural communities can adapt to the impacts of climate change, build resilience and restore livelihoods.

Accompanied by documentary filmmaker Qasa Alom, the audience virtually met and interacted with farmers participating in IFAD-supported projects, to discuss their climate challenges and how they and their rural communities are adapting.

IFAD’s experience in Bangladesh over 40 years shows how climate-sensitive agricultural techniques and approaches can have a direct impact on the lives and livelihoods of local populations.

Two examples are the Haor Infrastructure and Livelihood Improvement Project-Climate Adaptation and Livelihood Protection project (HILIP-CALIP) and the Promoting Agricultural Commercialization and Enterprises project where IFAD is working with the government and other key partners to ensure that rural populations have all the tools and infrastructure they need to create profitable and sustainable livelihoods, despite the threat of cyclones, droughts, soil erosion and rising water levels.

“While progress is being made, the government of Bangladesh and the people of Bangladesh need more financial and technical support to mitigate and adapt to climate change,” said Donal Brown, Associate Vice-President at IFAD on Wednesday.

“Successful projects really need to be scaled up, and that’s why the discussions at COP26 are so important. I’m confident that if we all come together and do provide the finance necessary, we will be able to have a successful response to climate change in countries like Bangladesh,” he added.

In Sunamganj hoar district, participants spoke about how frequent and prolonged flooding would sweep away their homes and cattle, and how it cut off mobility.

“Six months of the year the roads are underwater, which meant I couldn’t get to my crops to harvest them or sell them at market,” said Lalon, one of the participants.

Children would also be unable to go to school. Submersible roads and an early warning system are two of the interventions made by HILIP-CALIP to help people in the area adapt.

“I use the submersible road during the pre-monsoon period for transporting and marketing of agricultural/non-agricultural products. And the early warning system helps us to organise ourselves and harvest before the flood comes and store it in protection shelters,” said Lalon.

Meanwhile, in Satkhira district, near the Sundarbans, the world’s largest deltaic mangrove forest, participants are taking to crab farming in response to the changing climate in their area.

“I used to be a shrimp farmer but we have been experiencing more natural disasters in this region, which affected shrimp farming and the harvest. I learnt that crabs are easier to farm, as they are better able to deal with increased salinity and changing water temperatures,” said Masum.

This activity is supported by PACE.
Globally, only 3% of the global climate finance is targeted towards small-scale agriculture, and only 1.7% reaches small-scale farmers – a fraction of the support they need to adapt to a changing climate.

IFAD has historically prioritised adaptation finance and from 2019-20, 92% of IFAD’s climate finance was for climate change adaptation.

The Building climate resilience in the Asia Pacific region report, released earlier this week, reviews the key results and lessons learned from the IFAD-supported Adaptation for Smallholder Agricultural Program (ASAP) which ran from 2012 to 2017 and invested $305 million in targeted rural development projects that needed support in adapting and mitigating the effects of climate change on rural communities.

The ASAP program made significant progress in the region, supporting more than 510,000 small-scale farming households to adapt to climate change in Bangladesh, Bhutan, Cambodia, Laos, Nepal and Vietnam.

It analyses approaches and actions that were successful and can be “scaled up” in the region, providing a solid foundation for the new phase of the program called the Enhanced Adaptation for Smallholder Agricultural Program (ASAP+), potentially channelling an additional $500 million in climate finance to support the climate resilience of 10 million vulnerable people, particularly women and youth.