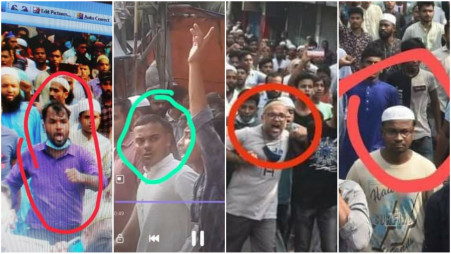 Police have arrested 10, including nine activists of Jubo Odhikar Parishad and Chhatra Odhikar Parishad, led by former Dhaka University Central Students' Union vice president Nurul Haq Nur, on allegation of instigating mosque-goers to attack the central puja mandap in JM Sen Hall in Chattogram last week.
Kotwali police station officer-in-charge (OC) Nezam Uddin told The Business Standard (TBS), "We have identified the instigators from CCTV footage of the attack. One of them has already stated that the whole incident was planned to make the country unstable."
So far, 100 persons have been arrested in various drives in the Satkania, Chawkbazar and Sholoshahar area in connection with the sectarian attack, the OC added.
Those arrested include Md Nasir, 25, convener of Chattogram city, Mizanur Rahman, 37, member secretary, and Md Rasel, 26, convener of Bayazid thana wing of Jubo Odhikar Parishad.
From Chhatra Odhikar Parishad, office secretaries Emon, 21, Yar Mohammad, 18, Yeasin Arafat, 19, Habibullah Mizan, 21, were arrested.
Apart from them, Imran Hossain, 17, a businessman from Terri Bazar and two youths named Md Mizan, 17, and Gias Uddin, 16 have also been arrested, said the OC.
OC Nezam Uddin told TBS that Nasir, Mizanur and Rasel were the masterminds of the attack. As per their plan, a rally and procession were carried out after Jummah prayers and later a part of the procession attacked the puja mandap. During the primary investigation, the three and Imran have provided some very important information.
Police have also arrested a BNP activist Imran Mazed Rahul, son of Md Ilias, senior assistant secretary of Dewan Bazar ward wing of BNP. One of his associates has stated in the court that Rahul had organised shop owners around Andarkilla Shahi Jame Mosque for the attack.
In the CCTV footage police have received, Nasir, Mizanur and Rasel were found leading the rally of 500-700 people at noon in front of the jame mosque.
Around 1:30pm, a rally from the New Market area moved towards Andarkilla, which was obstructed at the Nandonkanon Bose Brothers intersection by Kotwali Zone Assistant Commissioner Md Muzahidul Islam and OC Nezam Uddin.
Later, a part of the procession gathered at the Andarkilla intersection and tried to move towards JM Sen Hall but policemen dispersed them. One segment of the procession intended to go to the temple in JM Sen Hall and some people tore down the banners of the temple gateway. They dispersed after police fired blanks and tear shells.
Tipu Das, a witness of the incident, said, "The miscreants failed to enter the mandap building as the main gate was locked. Hindu devotees tried to build resistance against the miscreants but police stopped the devotees."
Chattogram Metropolitan Police Deputy Commissioner Bijoy Bosak told TBS, "Policemen were active from the very beginning to keep the situation under control. Police created a barricade with vehicles in front of the temple. A group suddenly tried to rush to the mandap but police moved them away within a minute."