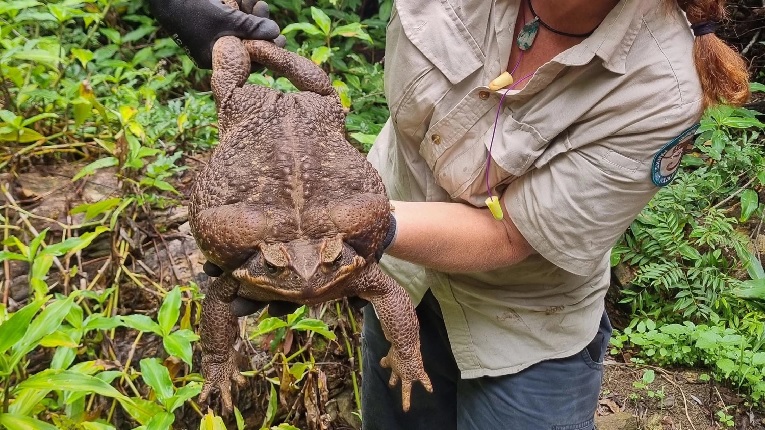 Australia's forest department workers claim they have seen the world's largest frog. They found the frog on January 12 in the deep area of ​​the Conway National Park Rainforest in Queensland, Australia. He named his frog 'Toadzilla'.
According to the news agency Reuters, Australians demand that the staff of the Forestry Department, why the toad species of frog has threatened the ecosystem there. Scientists were able to detect this a few months ago. After that the attempt to find out the reason started. In the meantime, Kyle Gray, a forest department worker, identified the frog for the first time on January 12 during a routine patrol.
Gray and another colleague took the frog from there and kept it in their office. There, the weight of the frog is found to be about 3 kg (2.7 kg). Earlier, in 1991, a frog in Sweden was measured at 2.65 kg. It was the world's largest frog till now.
"We thought we'd name the frog Connie after Conway National Park," Australian state broadcaster ABC told the ABC on Friday (January 20). But the name Todzilla was mentioned so many times that we kept it.'
Kayla Gray's colleague Barry Nolan told Reuters, 'These animals are killed as often as 10 common frogs for their negative impact on the ecosystem.'
Nolan said that around 1935 Ken toad frogs were brought to Australia. The intention was that this species of frog would eat dung beetles and other harmful insects. But over time, this frog becomes the top predator in the ecosystem, and because there are no animals to prey on this species, the number of frogs increases naturally, which eventually becomes a threat to other species of animals.
Barry Nolan also said, 'A female toadzilla lays 35,000 eggs. Their reproductive capacity is quite amazing. The entire reproductive cycle of the Ken toad is toxic to Australian native species. So we are working on how to prevent and manage these frogs.'

Who likes to travel? Almost everyone likes to travel somewhere far away. In this case, on the one hand, as one can stay very close to nature, the sto…